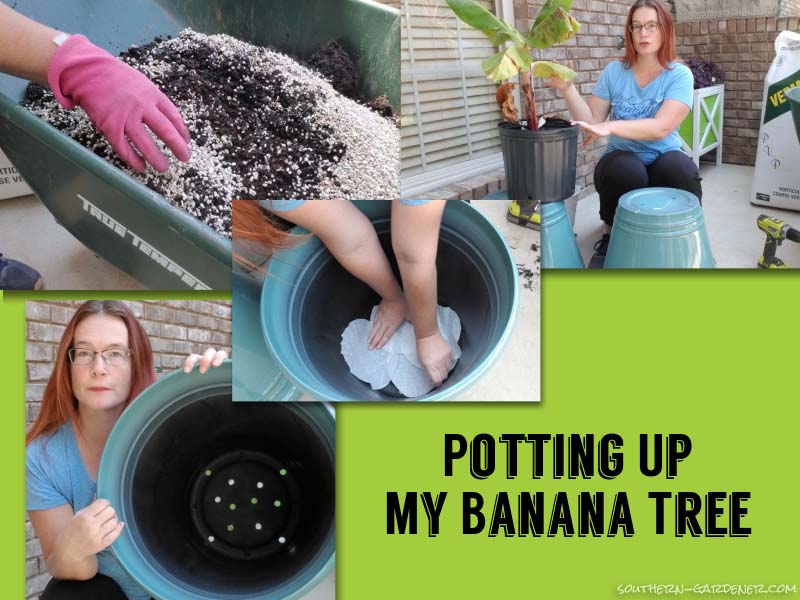 My poor banana tree was looking rather sad in the 3-gallon container I had originally planted it in when I received it in the mail earlier this year, so I decided it was time to put it in a bigger pot.  I plan to overwinter it in my ‘craft room’ here at the new house since it will not survive freezing temperatures or an unheated greenhouse here in Alabama.

For the soil mix, I use a mixture of coarse vermiculite, Black Kow composted manure, Jungle Growth potting mix, and regular Miracle Gro potting mix.  I don’t have a specific ratio; I just eyeball it.  The vermiculite helps retain some moisture so the pots don’t dry out so fast, and Jungle Growth potting mix is usually more coarse than Miracle Gro, so it helps with soil compaction.  So when I go to water the plant if it has dried out, the water soaks into the soil rather than running off the top because it’s hard as a rock.  Of course, none of us gardeners ever go that long between waterings, right?  😆

Here’s the YouTube video I posted that will walk you through the steps I took to pot up my banana tree.  Let me know what growing zone you’re in and how you overwinter your banana tree if you have one!

0 Comments for “Potting Up My Banana Tree”